There is a genuine interest in the cloud and networking industries to come up with a common information model that can be used across a variety of management and orchestration technologies. Unfortunately, discussions about unifying information models tend to get tend to get stuck because of a reluctance to deviate too much from legacy designs, because of different modeling philosophies used by different Standards Development Organizations (SDOs), or by disagreements on how best to represent domain-specific features. As a result, these harmonization efforts are not moving nearly as fast as anyone would like.

To move the discussions along, I would suggest that it might be helpful to focus first on a set of common modeling patterns that should be used by all information models, and then introduce domain specific models and features within the context of those core patterns. Leveraging the same core set of modeling patterns would allow us to build a generic set of orchestration and management tools that can process various models in a similar way.  While this wouldn’t immediately lead to unified models, it would result in unified modeling abstractions on top of which existing models can get refactored. If domain-specific models are expressed using the same core modeling abstractions, we’re bound to more easily find commonalities between these models, and common tooling will likely also make it easier to extract those common features from domain-specific models.

Of course, this begs the question of what common set of modeling patterns should be used. This is where I believe TOSCA can help tremendously. The TOSCA object model is sufficiently generic that it can be used across a wide variety of modeling domains. At the same time, it enforces a small number of very powerful abstractions that could provide the modeling foundation we just talked about.

Unfortunately, the TOSCA modeling abstractions are not widely understood. While TOSCA is designed for model-driven orchestration, the TOSCA specification focuses almost exclusively on the grammar of the language, and the object model for TOSCA service models is only implicitly defined in the language, rather than being explicitly spelled out. This write-up is an attempt at more clearly articulating the TOSCA object model.

At the core, the TOSCA object model has the following features:

TOSCA uses graphs as the core modeling construct for services:


The following figure shows a skeleton diagram of the basic TOSCA graph elements. 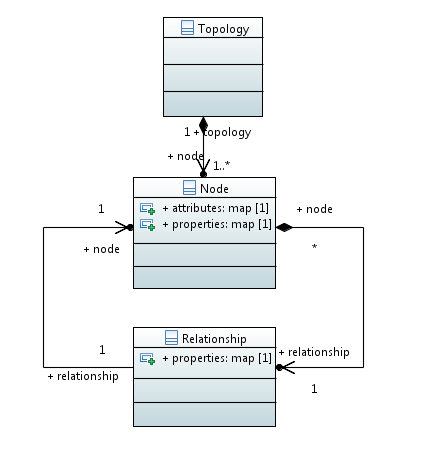 The use of graphs as the fundamental modeling construct combined with types as the specification mechanism makes TOSCA a flexible, general-purpose foundation for modeling a wide variety of application domains.

Any modeling infrastructure must include a capability to model how large-scale systems are composed of smaller building blocks. There are currently two competing patterns in the industry for modeling composition:


The industry is converging on the component pattern as the only pattern that is flexible enough to accommodate a wide variety of composition scenarios. This is based on the key observation that whether a component is atomic or composite is not an intrinsic characteristic of that component. Instead, it is just an artifact of where the modeler stopped decomposing (if you think about it, even atoms are not atomic).

TOSCA implements the component pattern through its substitution mappings feature as shown in the following figure: 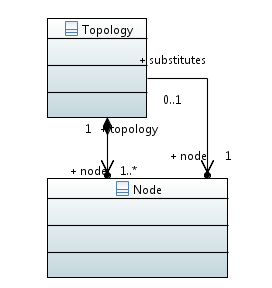 Orchestrators and management tools use models across the entire service lifecycle:


Ideally, it should be possible to use the same models—and the same modeling framework—to cover run-time, orchestration time, and design time. TOSCA allows you to do just that:


TOSCA models connect these three areas together in the following way as shown in the figure:

The following picture shows how these various features fit together into the overall TOSCA object model: 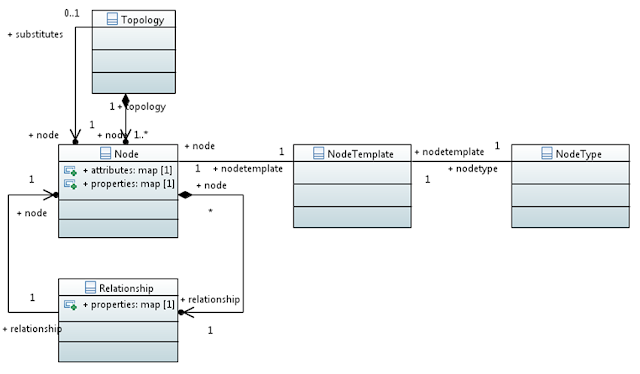 If we assumed a modeling foundation based on these TOSCA patterns, then creating a unified information model becomes a challenge of harmonizing type systems, which is something that could get done gradually over time.
Posted by Chris Lauwers at 12:47 PM